Lee and Jennifer met each other during college and became best friends before their relationship expanded. They have now been together for 30 years.

Although Jennifer told Lee that Huntington’s Disease ran in her family early in their relationship, Lee didn't appreciate the seriousness of it until a few years into their marriage, when Jennifer’s mother started showing signs of Huntington’s Disease. Jennifer and her mother got tested at about the same time. Both tested positive. At that moment, they felt like they were handed death sentences.

Rather than giving up, Jennifer and Lee decided to reimagine their lives and goals. They decided not to start a family, but to focus on each other, their extended families, their friends, their careers and travel. Jennifer started teaching high school English instead of continuing to pursue her PHD. Lee became a partner at his law firm, then the Managing Partner and is now the sole owner. They also became active in the HD community by attending meetings, advocating and raising money. With their extended family, friends and work contacts, they have been raising money and encouraging others to join them. One of their pre-teen nieces raised thousands of dollars on her own by selling t-shirts, cloth bags and baked goods, including cupcakes at a Team Hope Walk, where she herself was honored for her efforts. Their advocacy has also been successful.

When Jennifer had to stop teaching due to HD symptoms, she was approved for long term disability by a private insurance company but denied by the Social Security Administration. They battled the denial and won. With the help of HDSA, Lee testified about their experiences to try to get those with HD the Social Security benefits they deserve, even if their symptoms are cognitive alone (without physical movements), like Jennifer’s. 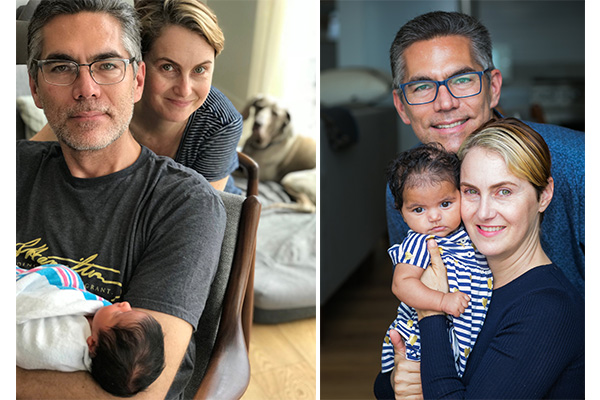 Jennifer has also participated in multiple HD studies and is still participating in the Roche/Genentech/Ionis study where treatment was recently halted. Lee has been pushing these drug companies to restart treatment or allow Expanded Access (sometimes called Compassionate Use) as they believe the drug has significantly improved Jennifer’s cognitive capabilities, including her ability to focus.

In 2018, shortly after the death of Jennifer’s mother, Lee and Jennifer became parents to a baby girl they named Margaux (after Jenn's mom).  5 1/2 months later the new home (which they had built just 18 months prior) burned down in the Wolsey fire. 2018 was a rollercoaster year for their family: yet they still found time to participate in the HDSA Walk and, once again, raise money as the leading fundraiser. They rebuilt their home, where Margaux just celebrated her third birthday.

The family has very full lives and full hearts. They continue to focus on each other (which now means the three of them), their family, their friends and hope to travel again once it’s safe to do so. Jennifer’s diagnosis has certainly not been a death sentence. Their lives have purpose and a future, and hope.