Los Angeles Chapter Home News #LetsTalkAboutHD - I Am Yours, You Are Mine, You Are What You Are

#LetsTalkAboutHD - I Am Yours, You Are Mine, You Are What You Are

It's June, so the HDSA "Let's Talk About HD" initiative is over, but I'm still going to write about it anyway! And even though I‘ve kept saying I have so much to tell that I could write a book, here I am, reading stories shared by others (like this one written by Hannah) that are so profound and touching, having not said a word of my own story yet.

Today is a day that my brain will only focus on HD. Some days it's really easy not to think about having 45 CAG repeats; to be busy and lose myself in work projects or other tasks and then suddenly it's time for dinner. But today is dragging on and every task I look at just mocks me when I try to pick it up. While I am behind on a few deadlines and could really use a productive day, it appears that today is not the day for me.

Something I've truly always wondered; @Apple, why would you make the edges of your laptops a sharp, right angle? I think it's only on the Pros. But why? So many times (like right now) I have to pull my sleeves over my wrists/hands because the exact place where the user is meant to rest their hands is sharp, and the whole edge of the laptop is trying to constantly emaciate me. Who designed this and why did I pay over a grand for a computer that's going to physically hurt me? The more and more I type it's like, hey, screw you.

So, this is my brain on the days when I'm not able to get my head or heart into my work. Along with anxiety, depression, PTSD, and ADD, I've ever so recently been diagnosed with Huntington's Disease. I've been so numb since I found out. And I wonder... Why does life seem to be working against me? It's not just one "**** you," it's five serious "**** you's" and all the accompanying bull**** like punches in the face.

One of the reasons that I can't get out of the worrying-about-HD headspace is that, over time I feel very much like I'm less and less protected by the one word, which at one point was my security blanket; which is an initial phase of anyone's HD journey after being tested; called being "asymptomatic." And this new realization for me is that it's coming to an end. I've noticed over the last few weeks that I am, in fact, developing symptoms and no longer safely being "asymptomatic."

I haven't told my family yet. It's almost worse than having to tell them that yes, I do have the mutated gene and I am positive for HD, but I am still protected, for now, by "being asymptomatic." After you develop symptoms, life becomes a very different experience, but I was still fine within my asymptomatic safety net.

I think my brain is shutting down because it just doesn't know what to do here. It's like, system overload.. harddrives crashing.

I'm reflecting on how my mom's HD story has literally been the complete opposite of mine because of genetic testing and other scientific advancements in the last few decades. Even though there's still presently nothing we can do to cure HD, at least I know and have a vague understanding of what's going on with me.

People with HD in the generation before me had it way, way worse. My mom became symptomatic in the early 90's (just shortly after I was born…. lol) and it took FIVE YEARS before any doctor could even take a GUESS as to what it could be. Imagine the fear of being a new mom with two little kids and a happy life and family, and then you start showing symptoms that are like "ALS, Parkinson's and Alzheimer's, simultaneously," and not a single doctor can say why. It's torturous -  just awful, in the real, true sense of the word.

I never got to know my mom. Carolyn, one of my lifelong best friends, was often at my family's house with me when we were kids and remembers quite a bit more about my mother than I do. So, when I struggled to draft a story for HDSA's "Let's Talk About HD" initiative, I asked Carolyn to write a story about my mother on my behalf. And, because she is such a genuinely kind and caring friend, you can read A Mystery Inherited by Carolyn Wray on the HDSA Los Angeles chapter's website (thanks so much Carolyn. xo).

I don't think I've ever even seen a picture of my mother and I together - I only spent about five or six years with her, and a lot of keepsakes like photo albums were destroyed by the trainwreck of unsupervised children and an unsupervised, HD adult. Thankfully Carolyn and a few others have always been happy to share their good memories with me, which I am ever so grateful for. The picture of my mom that's used in this piece showed up in my mailbox the other day, sent by a lifelong friend of my mother's, who has always kept in touch with me and tried to fill me in a bit on the nuances of my mom's personality (thanks so much Hope, xo). Hope, I believe, taught me that my mother loved fancy cheese.

My dad told me that she loved music, and one of her favorite bands was Crosby, Stills, Nash and Young. I love music too, especially CSNY and one song in particular that carries special meaning for me, Suite: Judy Blue Eyes:

Tearing yourself away from me now you are free
And I am crying
This does not mean I don't love you I do that's forever
Yes and for always
I am yours, you are mine, you are what you are
You make it hard
Something inside is telling me that I've got your secret
Are you still listening?

Unfortunately, as it's said not to do, I ended up having only bad memories of her. They started at my dad's house where he still lives today in CT. Within a short amount of time after her diagnosis, I accumulated more and more frequent memories of ambulances coming to take her away after she had done something dangerous while my dad had been at work all day. It was just she, my brother and I every day for a while, at home during my dad's workdays doing literally whatever we wanted without a single repercussion. For example, we had about twenty cats, my brother drove a vehicle across our front yard, and we charged thousands and thousands of dollars on credit cards; we put my dad into serious financial hardship from buying… whatever, basically nothing in the end. At the time it didn't seem that weird, but, of course, I was only 6 years old.

One of my most poignant (bad) memories was of her drinking heavily, breaking glass bottles and then accidentally walking on them. She was taken away in an ambulance, and I think that was the last time that she ever came back home. Kids at school, and even teachers, would ask me where my mom was, and I literally didn't have the right words within me to explain something such as this.

From then on, we visited her every Sunday, for years, at different nursing homes. I say "different" because none of them knew how to care for her. They would frequently give up on her and ship her off to the next facility. As a born free-spirit, she resisted vehemently. She apparently attempted things like breaking out of the nursing home and subsequently had to be placed on a locked floor with passcode entry doors. As her body and mind continued to degenerate, she was put in a wheelchair and eventually fed through tubes. I remember wondering whether or not she still knew my name. We ended up not visiting her anymore because it was too painful for us as kids, and I'm sure for my dad as well.

About twenty years later, my fiancé Gary gave me the emotional support that I needed to go back and visit my mom a few times, just by ourselves. That was in 2014 or 2015, around the same time we got married. Shortly after, in 2015, she passed away. It was decided that there would be no funeral or service, because she didn't have any friends or extended family anymore. In reality, there would have been nobody to attend except us: my dad, my brother, myself and my husband.

I'm 30 now, and I am not going to have children. I don't want any other child to experience what I went through as a kid, watching how Huntington's Disease ravaged my mother for twenty years. I'm going to be the end of HD in my family line.

As an adult, I am constantly reminded of my mom when I look in the mirror, which I see as both a blessing and a curse depending on the day. I've wondered many times what my life would be like if I'd had her in it. Even though I didn't know her, her absence was certainly missed. I raise my glass to her for being a frontierswoman along this horrible, scary, and at that time unknown, path. And now I follow, wearily, painfully, in her footsteps. 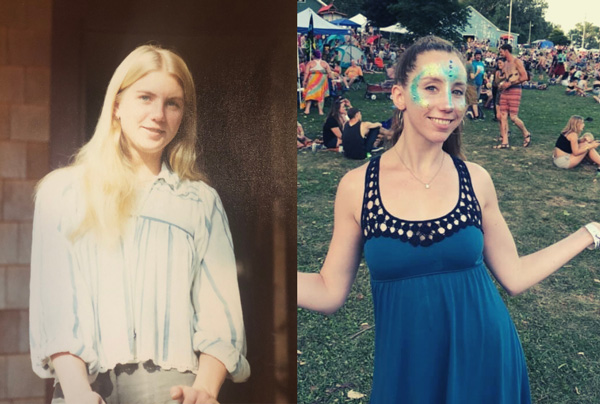